Every year in March we partner up with universities, institutions, organizations, hospitals, and service providers across the state to bring you a week [plus a bit extra] of events centered around the brain. Our events are fun, relevant, educational, and free! Watch this short promotional video to get a feel for our events. To learn more about previous and upcoming events, please visit the Event Calendar or check out our Event Summaries below.

Now in its fourth successful year, Brain Week Rhode Island partnered with Brown University to bring a team of graduate and postdoctoral students from Brown University to visit schools in Rhode Island. Outreach to underserved student populations was a priority, although both public and private schools were accommodated. At the visits, researchers brought preserved human brains as a springboard for lively discussions to explain decision-making, memory, sleep, the five senses, injury, and disease from a neurological perspective. The students, ranging from pre-kindergarten to seasoned high schoolers, got to hold and interact with the plasticized brains. Needless to say, they were thrilled with the opportunity. Even administrators and teachers from other disciplines stopped by to learn about the brain!

To discuss a visit to your school for next year, please email C. Paula Lewis-de-los-Angeles and Claire Kokoska at BrainWeekRI@gmail.com.

Brain Week Rhode Island celebrated its fourth annual year with an Opening Reception and fun networking hour for sponsors, organizers, participants, along with kids and adults of all ages that were curious about the brain. The event included wacky neuro-demonstrations featuring optical illusions and light / sound distortions, along with a Brain Art Fair that perspective is both malleable and captivating.  A wonderful microcosm for the Brain Week Rhode Island to follow, the Opening Reception proceeded immediately after a keynote lecture (Opioids: Health, Policy & Neuroscience).

For the third year in a row, and bigger than ever, the Brown Brain Fair, featured over 20 labs and organizations that showcased, through discussion and live demonstrations, the latest cutting edge brain science research. The attendees checked out “brains in a dish,” moved robotic arms with basic neuro ‘code,’ or tried their hand at an EEG recording. The experience of virtual reality, making original digital art using your own brain waves were well within reach! Younger kids enjoyed crafts, games, tasty treats, and face painting. The Brown Brain Fair won “Event of the Year” from the Brown Student Activities Office and was covered by several media outlets, including the Providence Journal and the Brown Daily Herald.

In the fight against Alzheimer’s, Brain Week Rhode Island teamed with the Memory and Aging Program at Butler Hospital to host a joint lecture and swab party. As roughly one in five adults over 75 suffers from Alzheimer’s, it is an incredibly prevalent disease that affects millions and their loved ones. Stephen Salloway, MD, MS, director of the Memory and Aging Program at Butler Hospital and Martin M. Zucker Professor of Psychiatry and Human Behavior at Brown University presented an eye-opening lecture on Alzheimer’s disease and the latest breakthrough research related to Alzheimer’s prevention and screening. Following the talk, eligible attendees were invited to participate in the swab party portion of the evening, involving a GeneMatch cheek swab on site to enhance upcoming Alzheimer’s research.

This event explored fear, interpersonal conflict, and social connection through an interdisciplinary lens, giving attendees the tools to apply these concepts to minimize domestic violence with community awareness and support. The hosting partner, the Nonviolence Institute’s mission is to teach, by word and example, the principles and practices of nonviolence, and to foster a community that addresses potentially violent situations with nonviolent solutions. It works to build Dr. King’s ideal of the nonviolent Beloved Community.

Attendees were able to explore current research on the topic of domestic violence with experts using hands-on activities and poster boards. The evening ended with a series of short talks given by experts on neuropsychology, sociology, psychiatry, and psychology related to human decision-making.

While suicide is 10th leading cause of death in the United states and rates of suicide have increased over the last 10 years, it still proves a difficult topic to broach. Our expert panel was comprrised of three  health professionals (one psychiatrist and two psychologists) and researchers, as well as a military veteran who personnally experienced attempted suicide and suffers with chronic ideation. The panel addressed suicide, risk factors, prevention, warning signs, and cutting-edge treatments from the perspective of researchers, clinicians, and patients. With such high prevalence, our goal was to educate attendees about suicide and related behaviors, in order to further reduce stigma surrounding suicide by speaking openly about it.

Brain Week Rhode Island was proud to bring a brain-themed Story Collider to adults of all ages. Whether we wear a white lab coat or haven’t seen a test tube since the eighth grade, science affects and changes us.  We were intrigued by the heartfelt and riveting personal stories of five incredible individuals that shared their brain triumphs and tribulations. Each of the five storytellers moved the audience with remarkable tales of their personal experiences in managing, understanding, and living through trying neurological obstacles, from chronic, incurable pain, to life-altering brain injuries.

Dance for All Ages and Movement Challenges

Taught by Rachel Balaban, co-founder and co-director of the Arts and Scientists as Partners (ASaP), this is based on the ongoing Dance for All People movement, designed to bring joy and movement to an aging population. The choreographies help participants increase coordination, strength, and flexibility, while releasing body tension, and improving balance and gait. An equal number of older adults and young adult volunteers promotes healthy intergenerational support and collaboration. A special Brain Week edition featured discussions about the physiological and cognitive benefits of exercise and social engagement.

Neuro-Advocacy Forum: Making a Difference and Making Your Voice Heard

One out of six Americans is impacted by neurologic disease. Chances are, you or someone you know has experienced a neurologic disease such as migraine, stroke, seizures, Parkinson's disease, Alzheimer's dementia, or multiple sclerosis. That's why advocating for brain health, brain diseases, and brain research is so important. Our experts in the field provided insight on how to begin advocating for further research into these neurological diseases that impact so many individuals and their loved ones.

Through Our Eyes Art Opening: The Human-Animal Bond

The Museum of Work and Culture in Woonsocket and the RI Consortium for Autism Research and Treatment (RICART) welcomed community members of all ages to an art exhibition focused on the bond between humans and animals, by artists diagnosed with autism themselves. A lovely singer / songwriter with autism himself, brought joy to the artists, families, and kids in attendance. Curated by Hartford, CT based artist, Matthew Best, the goal of Through Our Eyes remains to highlight the creativity and talent of people with autism while having a unique opportunity to see the world through their eyes.

For the third year in a row, the URI Brain Fair brought the latest research on the brain to audiences of all ages! The event was a free, family-friendly event featuring creative, hands on demonstrations and activities to entertain, educate, and inspire. A wide-ranging speaker series engaged the audience with research on the role of the brain in sleep and dreams, migraines, play, and more. Kids enjoyed live demonstrations like playing with artificial intelligence lab robots and larger than life neuron simulations, along with fun performances, such as Marvelous Marvin’s “Brain Circus,” in which he demonstrates the importance of exercise and reading on brain health through dazzling skill in juggling, hula hoops, rhythm sticks, and more. 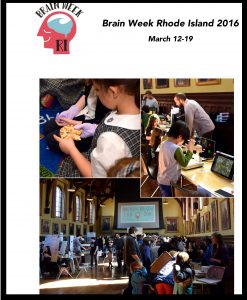 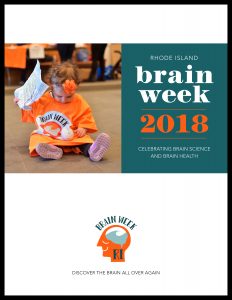