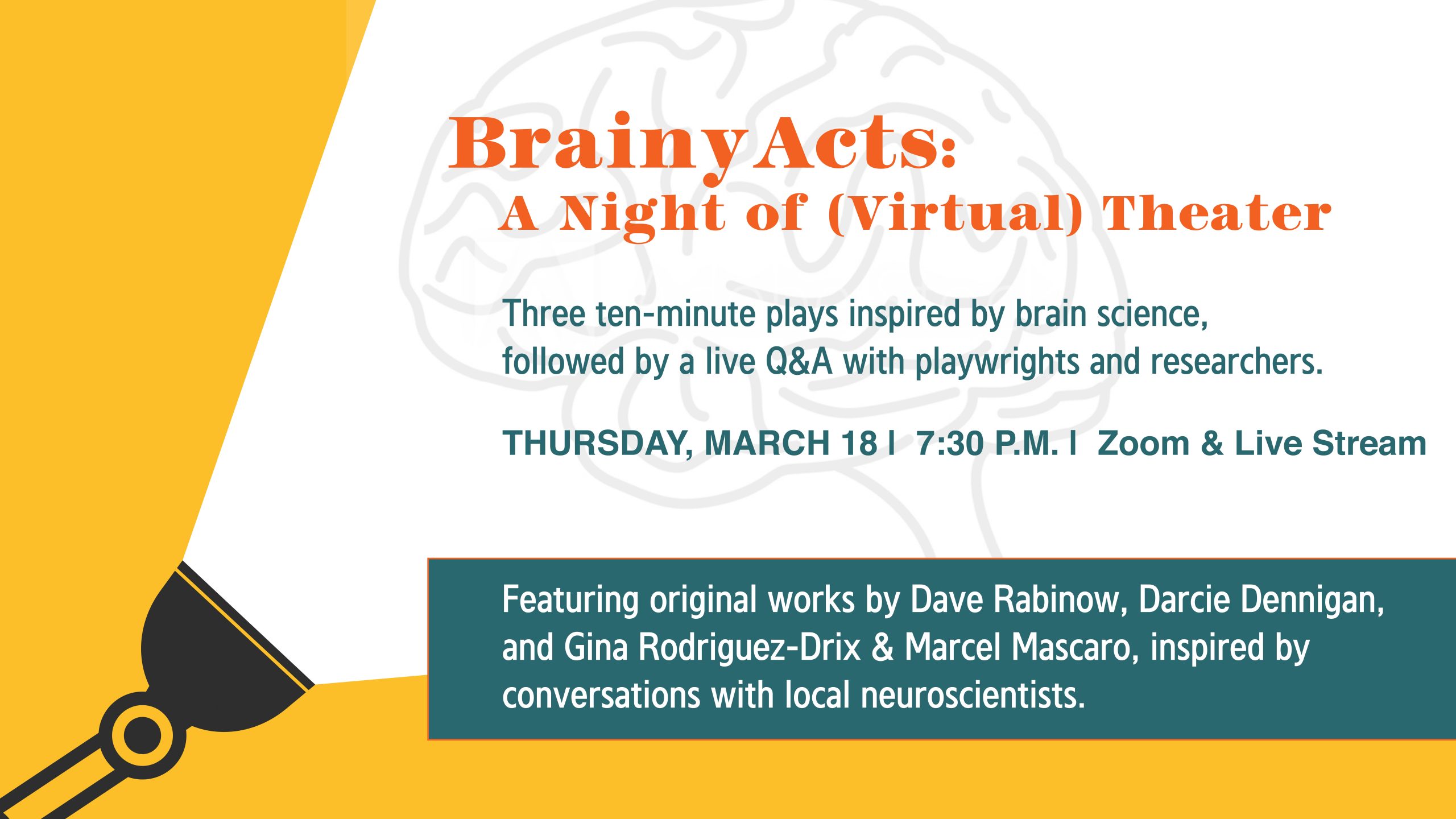 The brain is pretty inspiring, and we've got the 10-minute plays to prove it! Join us for the premiere of three one-act plays, based on conversations with local neuroscientists. After the show, we'll chat live with playwrights and the researchers who helped inspire their work. Featuring JOURNEY INSIDE YOUR MIND: A THRILL RIDE by Dave Rabinow, AGRIPPINA DI MINEO PLAYS THE WHO ON HER PIANO by Darcie Dennigan, and CROSSING THE THRESHOLD by Gina Rodríguez-Drix & Marcel Mascaro. Performed by a talented cast from the RI theater scene and directed by Tyler Dobrowsky, known for his work at Trinity Repertory Company and the Gamm Theater.

The event will take place on Zoom Webinars. To attend, please register by clicking below.

JOURNEY INSIDE YOUR MIND

Journey Inside your Mind follows an intrepid theme-park visitor who visits a cutting-edge thrill ride: a roller coaster-like experience that somehow zaps its participants into their own brains. Our rider, however, gets more than they bargained for when they start asking questions … 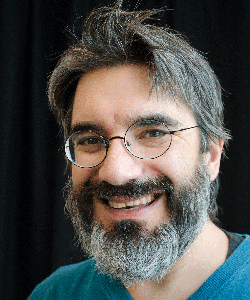 Dave Rabinow is a playwright and performer who has been working in and around Providence for twenty years. A graduate of the Trinity Rep Conservatory and an adjunct faculty member at Providence College, some of his recent work has been commissioned by and workshopped at Trinity Rep and the Wilbury Group, and his musical A Brief History of the Earth and Everything In It… was produced at the University of Rhode Island. He is also a teaching artist with the Gamm Studio and a collaborator with the Empire Revue. He plans to release an album later this year.

AGRIPPINA OF MINEO PLAYS THE WHO ON THE PIANO

Agrippina of Mineo sits down at the piano to pick her way through the chorus of “Won’t Get Fooled Again.” As she plays, her cat, Dopamine, ripples up and down a spiral staircase. This spiral is both staircase and Agrippina’s striatum. Her wrong notes are thunderclaps and car blinkers, and her cat ripples downward. The right notes elicit meows and Roger Daltrey’s famous “Yeah,” as Dopamine purrs along toward the lateral striatum. 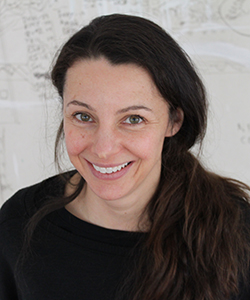 Darcie Dennigan is author of five books of poetry, performance texts and prose, including Palace of Subatomic Bliss (Canarium, 2016) and Slater Orchard: an etymology (FC2, 2019). She is currently a resident playwright at the Wilbury Theatre Group and poet-in-residence at the University of Connecticut.

A patient and a doctor share a journey of coming to consciousness after a seizure, attempting to make sense of time, memory and pain. As they string together the events leading up to the attack, they wrestle with a condition that can make memories seem like ghosts and a healthcare system that can’t afford time. What does a patient wake up to? How does a doctor make sense of the senseless? How can a patient comprehend the effects on their brain when the experts themselves are confounded? 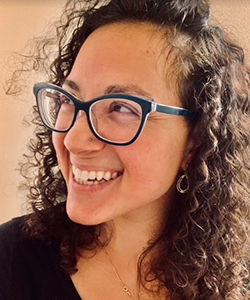 Gina Mariela Rodríguez-Drix (she/hers) is a Providence based multi genre writer, performer, and arts administrator. Her writing has been published in Birthing Justice: Black Women, Pregnancy and Childbirth (Routledge, 2015), Out of Many: Multiplicity and Divisions in America Today (Cat in the Sun Press, 2018) and Ruffles, Repair, and Ritual: The Wedding Cake Anthology (The Dirt Palace). Her plays have been seen at Brown University (Ariel, 2008), the Drama Bookshop (Ariel, 2008), UMASS Dartmouth (Free at last (?), 2013), as part of America Too: Providence Housing Crisis at Trinity Repertory Theatre in Providence (2018). Most recently, Gina appeared as a solo performer at Fire Flowers and a Time Machine (directed by Marcel Mascaro, produced by Shey Rivera Rîos and Wilbury Theatre Group) and co-curated and produced the Dreamscape Archives: a virtual ritual withvisual artist Dara Bayer. She holds a bachelor’s degree in Africana Studies from Brown University and raises her young family in Providence, where she also serves as the Cultural Affairs Manager for the City of Providence Department of Art, Culture and Tourism and is a practicing birth doula. 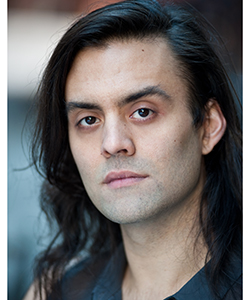 Marcel Mascaro is a non binary Theatrical artist located in Providence, who is interested in contradictions, change, social justice, truth, immigrants, refugees, politics, representation, complexity, intersectionality, radical accountability, anti racism, pain, love and patience. Most recently, Marcel has worked as a teaching artist, director, editor, voice over, and actor, most recently with RILA, Trinity Rep. and most notably as a resident artist with The Wilbury Group. 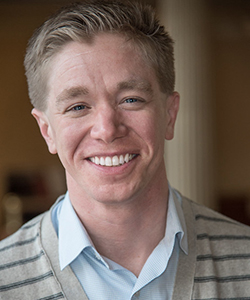 Tyler is a freelance theater director, producer and educator. For over fifteen years, he worked at Trinity Repertory Company in their education, community engagement and artistic departments, where he spearheaded a number of initiatives including Trinity Rep’s summer camp for young people (YASI). He also worked with Marta Martínez and Rhode Island Latino Arts to create Teatro en el Verano, a free, bilingual, mobile theater program that brings English/Spanish theater to communities across RI. As director of new play development at Trinity, Tyler commissioned a number of writers and performers, He has also directed at Asolo Rep, the Gamm Theater, PlayMakers/UNC, and the Public Theater, with upcoming projects at A.R.T., Long Wharf and the Heritage Theater Festival.

Tyler has taught at Boston University, Brown/Trinity Rep, NYU/Tisch, Rhode Island College, RISD as well as a number of other colleges and universities. He is a proud member of the Stage Directors and Choreographers union and sits on the boards of Rhode Island Latino Arts as well as Spectrum Theater Ensemble, an organization dedicated to providing opportunities for neurodiverse artists. Tyler went to undergrad at Holy Cross in Worcester, MA, and received his Masters at Brown University. His first film, Capsule, written and starring Whitney White and Peter Mark Kendall, premiered through the Public Theater’s website in January 2021. He currently serves as the Practitioner-in-Residence at Brown University’s Swearer Center for Public Service where he and his wife, Taibi, are creating a free, multi-discipline community pageant to be held in Providence, RI, in the summer of 2021.